The financial crisis of 2008 merely pulled the covers off forty years of  stagnant wages, combined with low tax rates on the wealthy, that shifted most all new income to the top one percent, and ham-strung our economy. We propose a sharp increase in the Earned Income Tax Credit, paid for by much higher taxes on the rich to even the playing field and reduce wide-spread poverty in this great country.

A new video by Prof. Robert Reich and Inequality Media, contained in a new website by the Economic Security Project, provide much of the background and justification for expanding the federal Earned Income Tax Credit – also known as a Cost-of-Living Refund and a Working Families Tax Credit – to help Americans who are struggling economically (most of us). (The Economic Security Project also appears to promote a Universal Basic Income.)

Federal legislation has already been introduced to support this most worthwhile endeavor!

Here is a six-minute video that shows how the distribution of U.S. wealth today is far more unequal than most of us think it is.

The chart below left shows how the median wage flat-lined,starting in the mid 1970’s, cutting the knees off middle-class wage-earners. The resultant GAP now amounts to an additional $1 trillion per year going to the already wealthy, over and above what they would earn if wages had kept up with productivity. The chart on the lower right shows the way tax rates have fallen during the same period of time, allowing the wealthy to keep all that extra money. (Click charts to enlarge.) 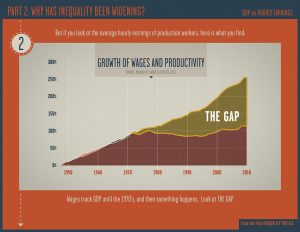 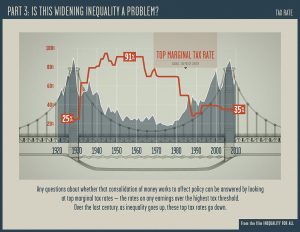 Poverty and lack of good-paying jobs are undermining rural economies. Well over half the kids in the Baker School District qualify for free or reduced-fee lunches, giving some indication of the extent of the poverty that afflicts us. The prosperity enjoyed by two or three generations of an expanding middle class following World War II is on the way out. Unrestrained advantage has gone to the super-rich and politically well-connected who are taking and keeping America’s wealth. Even if unintended, this is class warfare in a brutal form, and as Warren Buffett, one of the world’s wealthiest persons says, “My side is winning.” The rest of us may have to settle for a career of low-paying jobs.

Beginning around 1970, advances in computer and robotic technology have doubled our productivity. The advent of the brilliant machines trumpeted by GE, IBM’s “smarter planet,” and computers smart enough to defeat the champions of Jeopardy are emblematic of a revolution that is replacing humans with computerized machines in many industries. Here is a video describing this ongoing revolution. Along with off-shoring many 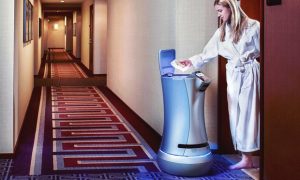 good-paying jobs and union busting, automation and computerization have eliminated many family-wage jobs and have damaged middle-class prosperity and prospects. Millions are without bargaining power, are unemployed or under-employed, automation is still increasing, many existing jobs are in line to be automated in the next 20 years or so, and the wealthy are enjoying phenomenal prosperity, at least in the short term.

It is the height of irony that, given advances in production technology, Americans are now working longer hours for the same wages they earned in the mid-60’s, and more and more workers are sliding into poverty.

According to an Associated Press survey of noted economists, the imbalance of wealth is actually holding back our economy. If it were corrected, everyone would benefit. People and families with living-wage incomes buy much more and create many more jobs through their purchases. Another benefit of a correction would be depriving international hedge funds of the capital they invest around the world in pursuit of the current highest return — and the boom and bust economies they leave in their wake.

Capitalism remains the best generator of wealth we know of, and our economy is doing well in total.  But, because of productivity increases and stagnant wages, a relatively few individuals — the “one percent,” located in, say, Southhampton, NY, or New York’s Park Avenue — have benefited beyond limit and beyond reason, thereby leaving the rest of us holding the short end of the stick.

How can our nation’s wealth be more fairly distributed? We believe that our democracy of, by, and for the people, while imperfect, has a central role in using the common wealth for the common good. The rub is that almost all politicians won’t talk about this at all, for fear of offending their top campaign contributors. But those fears are actually groundless. The wealthy need not sacrifice. We all do well, when we all do well. Creating more and healthier customers expands the economic pie, meaning there’s more for everyone.

We heartily recommend this beautifully balanced interview of Robert Reich about the documentary film Inequality for All, which is available on Netflix and on DVD at Baker County Libraries. Professor Reich offers the promise that a mobilized and energized citizenry can and will return us to an economy that works for everyone. We applaud his approach: that effective income tax rates for the wealthy one percent (who take home over twenty percent of our national income) be returned to those of the 1950’s under Republican President Eisenhower; that the minimum wage be increased; that job-sharing, and, as now being advocated even by some prominent Republicans, increases in the Earned Income Tax Credit be used to generate family-wage incomes for the rest of us. And additional jobs can be created by spending some of the increased tax revenue on repairing our infrastructure and funding our schools.

This is not a pie-in-the-sky proposal. It was actually implemented in the Clinton Administration. It is at the heart of the FY2016 budget proposed by the Congressional Progressive Caucus, is endorsed by billionaire Warren Buffett, is at the heart of The Progressive Agenda, and it is in line with public opinion. A recent Gallup poll finds that 63 percent of Americans believe that the current distribution of wealth is unfair, and 52 percent say that the problem of inequality should be solved with “heavy taxes on the rich.”

Join us. Your participation is essential in providing opportunity and fairness for everyday Americans.