The 2018 election season offered us another big opportunity to bring people together and move us toward the kind of nation we desire in our heart of hearts. Here is our 2018 Voters Guide. We were successful, in large measure.

We started the year with a special election on Oregon Measure 101, the Healthcare Insurance Premiums Tax for Medicaid Referendum submitted by the Oregon Legislature to provide funding for Medicaid expansion.  It was approved with 62% of the statewide vote. Bravo! Also, in the May Primary, Democrat Val Hoyle was elected Commissioner of the non-partisan Bureau of Labor and Industries.

We wholeheartedly support  Kate Brown, for reelection as Oregon’s Governor! She’s supporting  working families, small businesses, raising the state’s minimum wage, our children, education, our retirement, and clean energy. We could not ask for a better leader!

Jamie McLeod-Skinner, our outstanding candidate for U.S. Representative, won her 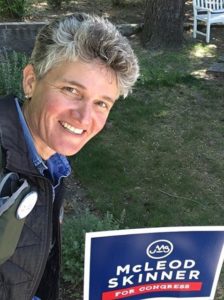 nomination with 43% of the Democratic primary vote against six opponents. Here is a video of her vigorous debate with Rep, Greg Walden on October 5th.

Jamie was here in Baker City for a most successful Town Hall meeting on October 20th. Before that, she had an enthusiastic full house at her meet-and-greet here in Baker City on June 29th, and she joined us again at the Miner’s Jubilee on July 21st. We had a big turnout and a great time! Check out all the yard signs around Baker County! Go, Jamie! We are lucky to have her, and her chances to win are good!

Here are her web site and her Facebook page. Please join us in supporting Jamie with campaign contributions and in whatever way you can to “Repeal and Replace” Greg Walden in Oregon CD2.

The recent wave of Democratic victories in “safe” Republican districts shows that voters nationally are discovering and rejecting the empty promise of GOP ideology (like the outrageous tax cut for the wealthy that’s virtually invisible to most low-wage workers). See Jamie’s interview on KGW’s “Straight Talk” to get a feeling for her commitment to righting so many wrongs.

She is supported by physicians in our district, because, unlike Walden, she will protect our healthcare.

See the Democratic Party of Oregon (DPO) web site to learn about the harm Greg Walden is doing to us. You can visit the Walden Sold You Out Facebook page to learn more about the constituents Walden really represents. And here is the Baker City Herald’s editorial calling on Walden to debate Jamie.

Solea Kabokov is a life-long activist working for social, racial, economic and environmental justice. She is committed to transparency and accountability without the influence of special interests, corporate power or money.

Yes on 102, which allows local government to issue bonds to develop affordable housing.

No on 104, which makes it harder to remove tax breaks and loopholes for big corporations.

No on 105, which would make the job of local law enforcement in minority communities harder.

No on 106, which would restrict access to legal abortion in the state.

We ask you to become informed and make your own decision on Measure 1-88, a $48 million bond measure to build a new elementary school, remodel Baker High, and other work, including energy efficiency and security upgrades.

Baker County Justice of the Peace

Brent Kerns was elected Justice of the Peace, with over 50% of the vote.

Be sure to VOTE in the general election, November 6th!