We propose a national debate on the international threat of global warming. Our specific proposal describes recommended solutions, which include a carbon tax. Whether you agree with them or not, we urge all citizens to get involved in the debate.

Baker County is now affected by a prolonged drought, and we sit in the midst of an unprecedented, extreme drought in the western United States, which is expected to continue. In 2015, we joined much of the rest country in experiencing the impact of climate change and global warming, as wildfires consumed 150,000 acres in our county. In contrast, four counties in Southern Florida, with a combined population of 5.6 million face impending destruction from increasingly frequent floods as the polar ice caps melt more quickly and the oceans surge and gain ground.

Global warming is impacting these events and making them more extreme.

Despite denial, controversy and confusion generated by a small number of self-interested or ideological parties, we all face danger from global warming caused by increasing concentrations of man-made emissions of greenhouse gasses, particularly carbon dioxide and methane. The major dangers are melting ice caps and receding glaciers; rising ocean levels; drought and wildfires; tornadoes; and the intensity of “super storms,” such as Katrina, Sandy, and Haiyan, and record rains and flooding in England. The 2014 Oso, Washington landslide was preceded by 200% of normal rainfall. Here is a useful summary of the situation by the Union ofConcerned Scientists. And here is a recap by the Associated Press. The May, 2014, NOAA National Climate Assessment, the largest, most comprehensive U.S.-focused climate change study ever produced, confirmed that climate change is no longer a future threat, but happening in the present.

By volume, the Earth’s atmosphere contains 78.09% nitrogen, 20.95% oxygen, 0.93% argon, 0.039% carbon dioxide (CO2), 0.0001745% methane (CH4), and small amounts of other gases. Air also contains a variable amount of water vapor, on average around 1%. Despite its relatively small overall concentration, CO2 is important, because it absorbs and emits infrared energy which would otherwise be radiated to outer space.

The present level of CO2 appears to be the highest in the past 800,000 years.  According to Wikipedia, the amount of atmospheric carbon dioxide was 280 ppm (parts per million) in pre-industrial times, and has risen to 400 ppm as of May 2013, with the increase largely attributed to man-made sources. About 57% of CO2 emissions go to increase in the atmospheric level, with much of the remainder contributing to ocean acidification, which threatens entire marine food chains.

Here is the famous Apollo 17 photo of our home, Spaceship Earth. Together, we put men on the moon, and together we can solve the climate problem. 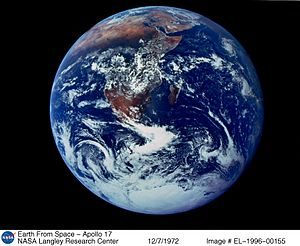 Proposed solutions include energy conservation, tougher controls on carbon emissions, and development of alternative energy sources. To spur such solutions, a revenue-neutral carbon tax is gaining favor, and is now being included in the long-range economic plans of our largest corporations. Senator Bernie Sanders has introduced legislation, as has Senator Sheldon Whitehouse. It has already been implemented in 60 nations, including Great Britain, Australia, Sweden and British Columbia. China is supposed to start one in 2015. Here is an article describing the potential for a carbon tax, based on the work of Cal Tech Jet Propulsion Lab Scientist Robert Haw. Oregon has now joined California, Washington, and British Columbia in the Pacific Coast Action Plan on Climate and Energy, which proposes just such a solution.

And, as of January 16, 2019,  over 40 eminent economists now call for a refundable carbon tax to counter global warming in a meaningful way. “A carbon tax offers the most cost-effective lever to reduce carbon emissions at the scale and speed that is necessary,” the economists wrote in letter published in the Wall Street Journal. A key feature of their recommendation that the tax revenue be rebated to low and middle-income families to avoid stout resistance to the economic harm that befell families in France.

Please join us in clarifying the facts and finding solutions to this danger to Baker County’s agricultural economy, our water supply, and the well-being of our fellow citizens around the country and around the world.