The Oregon Trail, the enduring symbol of our country’s greatest migration, winds through Baker County. The Trail’s distinguishing feature is the deep wheel ruts made by wagon 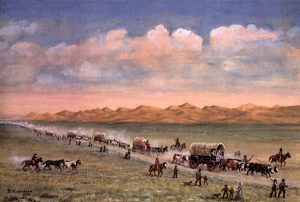 after wagon carrying 400,000 pioneers along its well-worn path.  This is an important and powerful symbol of interdependence and collaboration. It’s emblematic of the inclusive, cooperative Democratic belief that “We’re all in this together,” which is far more powerful and productive than the idea of “rugged individualism” and the admonition that “You’re on your own” in a callous world.

As the Baker County Democratic Central Committee, we are part of the Democratic Party of Oregon (DPO). We provide mutual support to each other at the local level, and we work to further the DPO Platform. We are pleased to note that the 2018 DPO Platform supports a Universal Basic Income (UBI) to counter growing inequality of wealth,  and the top priority of the 2018 DPO Priority Legislative Action Items is a “comprehensive, universal, publicly-funded healthcare system…”

We get-out-the-vote through our network of Precinct Committee Persons (PCP’s) to elect Democratic candidates — such as Oregon’s remarkable Senator Jeff Merkley.

Our Facebook page updates our current thoughts, events and activities. Our By-Laws are available here. And our brochure may be found here.

Oregon is fortunate to have Democrats represent us in six of our seven Congressional seats. (The one exception is a Republican representative in our own 2nd Congressional District whom we are working to replace with an outstanding Democrat in 2018 ). Democrats also hold key elected administrative and judicial positions in Oregon and within Baker County and Baker City.

But we are not complacent. We are aware of a rural-urban and right-left divides that make it difficult to work together constructively on national problems (in the links under “Issues”) affecting Oregon and our local area. We are also aware of the influence of right-wing think tanks, talk radio, Fox News, email networks, and conspiracy-theory books and videos that regularly regurgitate anti-government messages of fear, hatred, and misinformation. Extreme conservatives have apparently even chosen to become willfully ignorant of our problems. Perhaps denial seems safer, when any potential government intervention is dreaded (illogically) as a step on the “slippery slope to communism.”

We aim to counter anti-government sentiment, denial, and misinformation with one of our core beliefs – that we must work together inclusively: We believe that our democracy of, by, and for the people, while imperfect, has a central role in using the common wealth for the common good. Thanks to our democracy, the United States of America recovered from the Great Depression, was victorious over the Axis powers, and fostered the surge in middle-class economic strength during the 1950’s and 1960’s. Never doubt that we can do this again!

To this end, we have established this web site to offer evidence and facts that illuminate the issues we face and bolster our firm conviction that we need to work together with each other and with our elected officials to resolve those issues.

Our meetings are held on the third Thursday of each month in Baker City, and you can reach us by clicking here.

We invite you to join us.